This was an all too exciting day…I was going to a magazine interview and photo shoot!  It was the 1st ever magazine photo shoot and interview that I’d set up!  With no experience in doing something like this, having only the drive to make it a success, I’d contacted the publisher by sending, what she called, a very “eloquent letter” detailing the accomplishments and community efforts of Saints DB Malcolm Jenkins, and asked for an interview for him.  I was granted not only an interview, but the cover, too!

I’d dotted my i’s and crossed my t’s and made sure that he was familiar with the questions that would be asked so that he was prepared with the answers and didn’t look “goofy”!  Since interviews should fit in with the branding strategy or publicity campaign designed for the client,  a publicist should never leave an interview to “chance” or “hope that it will go smoothly”; the client should always be prepared!  This is one way of keeping things clean, or stopping the mess from being made.

Ok now, back to the interview and photo shoot…

I was so glad that I’d brought along my daughter, whose Twitter handle is @MadameGoofsAlot by the way, to assist me.  She definitely helped to get Malcolm to give the photographer, what she called, “a big Kool-Aid smile”, just by saying silly things and cracking jokes!  Oh and I can’t forget to mention that, when we arrived to the area reserved for us, we were greeted by another local celebrity, musician Amanda Shaw, who, I found out later, Malcolm was a fan of, but had never met.  Wow!  What a way to make everyone even more at ease!  It was little things like that lining up to make this photo shoot and interview go quite well!  It’s funny how I appreciate that more now than I did then…guess I was too nervous to stop and take it all in! 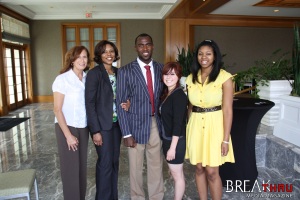 After the photo shoot and interview, we sat down for lunch and conversation, but the work was not over yet;  I had to then make sure that nothing went to print without my approval.  Talk about pressure!  Training camp had started, so to avoid “bugging” Malcolm, I had to read, and re-read (if that is a word) over the interview and even add little personal details about him to it, just to make sure fans would be able to see beyond the uniform.  The next step was to approve the photos that would be used, for both the front and back covers and in the inside.  Oops!   Wait!  I forgot to mention that the magazine’s publisher requested uniform or “action pictures”!  Imagine having to stand in the hot sun at Saints’ Training camp to make sure that the photographer not only got good pictures, but that Malcolm wasn’t unnecessarily “bothered”!  Of course I am a Saints fan (note my Twitter handle – @ToniGoSaints) so it wasn’t so terrible, but I couldn’t totally relax or be too nice…I was working!  When assisting public figures, I’ve learned it’s important not to try to be the “nice guy”.  People are sure to try to get passed the publicist or assistant, to satisfy their own agendas, so all smiles must go out the window…always look out for your client’s best interest!  As a publicist, “crowd control” is a necessary evil.  Without it, your client may end up having to explain the unexplainable!   Most often, the publicist has to be the “bad guy” so that the client doesn’t have to be!

After all of that, and more details that I don’t want to bore you with, the magazine was printed and out on stands and needless to say, I was very proud!  Little did I know that other members of the Saints organization would soon follow after and seek to get the same royal treatment that Malcolm received, but wasn’t it too cool that he did it first?  And in my book, it’s even more cool that I helped him to.  To further add to the excitement, I randomly selected a few Twitter fans to receive autographed copies of the magazine!  Judging by the reaction of the fans, this proved to be a great move, because it goes without saying that fans appreciate the public figure or celebrity that takes the time to do what they don’t have to.

Take a look at the magazine online at http://magazinevolume.com/7462BM/…ain’t it grand!!